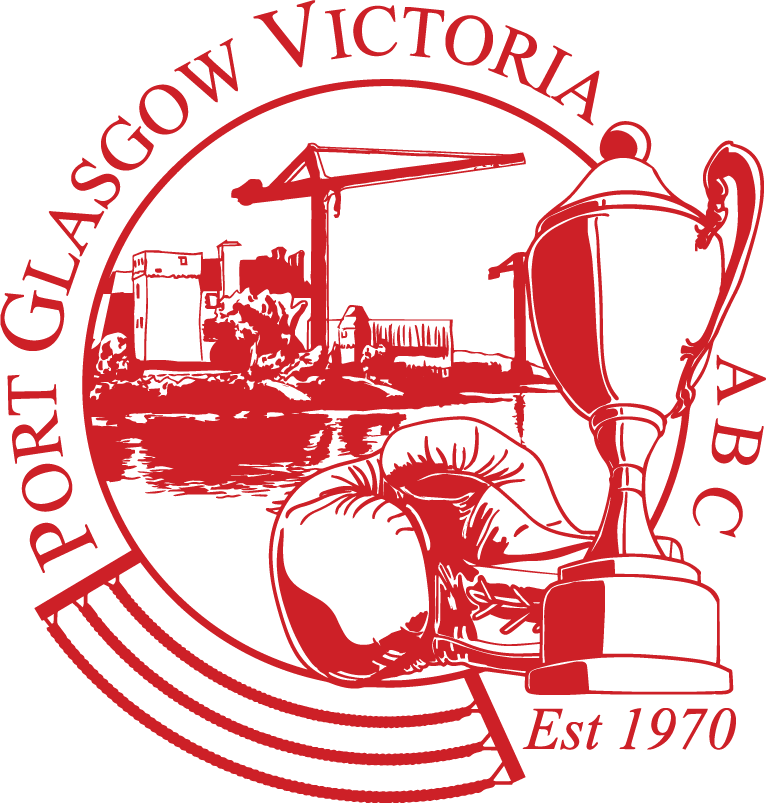 The Port Glasgow Victoria ABC was founded in 1970 with little more than 2 punch bags and lot of ambition. Started by Tony McCrory, in the Elim Hall in Gibshill, as a means of providing physical training for aspiring pugilists, the club has attracted many notable fighters and over 30 champions competing at all levels over the years.

In 1986 the club made the move to Port Glasgow by securing brief lodgings in a church hall near the once thriving shipyards at Ardgowan St, in the shadow of the monumental Scott Lithgow crane. This was however a short lived incarnation of the club as it then went on to take residence in Falconer St overlooking Port Glasgow’s central bus station. Here it stayed for 5 years cultivating talents such as Kenneth Crighton & Rodney Campbell.

After only a short stay, and having been given the chance to establish and expand, the club moved to another church hall on Jean St, just behind the now defunct Mecca Bingo hall. Here, under the guidance of head coach Frankie Boyland, the club was able to grow further and earn achievements such as Commonwealth Games Medalist, Olympic Qualification and various British Titles with the support of coaches Rodney Campbell and David Henry.

In 1999 the club was taken over by the current Head Coach Kenneth Crighton. Under his guidance fighters such as Grant, Gregg & James Quigley had the chance to fight on the international stage, in competitions such as the European Championships in Sweden and Hamburg as well as regular participation in events in England.

With a brief sojournment to Falconer St, an injection of new funding and a string of successes the club took up a new permanent home in the Old BB Hall in Balfour St, just down from the Birkmyre Park. Having acquired a 20’x20’ boxing ring and periodically adding to the equipment available for training, Kenny was able to offer a wider range of set classes to the roster and attract a wider range of members adding in a women’s fitness class and a dedicated juniors class. 2004 saw the arrival of Natalie McKay, who in 2006 became the club’s first female boxer competing in Sweden and Germany, and going on to win her first title Scottish Ladies Champion in 2013. Other notable achievements in this incarnation included, Darren Brown winning Scottish and District Championships.

With the clubs continued expansion and growing numbers, and after 10 years training under a leaky roof, the club took up residence in the Glen Community Hub (formerly The Glen Park Rangers Club), where it was opened by MSP Duncan McNeil. Kenny’s passion for the club continues to shine through with his constant bolstering of club funds through grant applications, sponsorships and endorsements sought after and acquisition of new training equipment. Now aided by Assistant Coaches Sean Gray, Natalie McKay and Billy Clarke the club continues to grow and offer new opportunities with Natalie pursuing a bid to compete in the upcoming Commonwealth Games in Glasgow.